The DIRECTIVE 2011/36 / EU OF THE EUROPEAN PARLIAMENT AND OF THE EUROPEAN COUNCIL, April 5, 2011, “recognizes that human trafficking has a dimension related to gender equality and that, in many cases, women and men are not victims of human trafficking for the same reasons. It is therefore appropriate that assistance and support measures are also, if necessary, adapted to this dimension related to gender equality”.

November – December 2015: after a poster campaign, we send out a Team of volunteers of our Association to meet students, who have contacted us, and who are facing a situation of prostitution.

Poster campaign - Students in a situation of prostitution (young women) 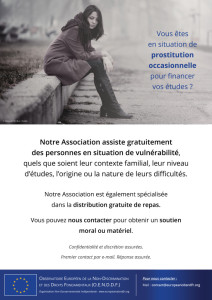 Poster campaign - Students in a situation of prostitution (young men) 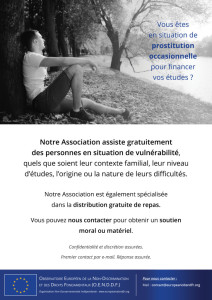