Últimas entradas
Tú estás aquí: Inicio / Acceso a la justicia / European campaign against hate crime and for access to justice.
Imprimer
A- A A+

Objective : To carry out a european campaign against hate crime and for access to justice for all.

Location of the action : European Union.

During the year 2016 : Our Association has started a European campaign against hate crime and for access to justice, with posters recalling the importance of the European Charter for Fundamental Rights in the European Union.

Posters are translated into English, French, Turkish and Dutch language.

European Union Agency for Fundamental Rights : “ Violence and offences motivated by racism, xenophobia, religious intolerance, or by bias against a person’s disability, sexual orientation or gender identity are all examples of hate crime» (learn more : http://fra.europa.eu/en/theme/hate-crime).

«HAVE YOU BEEN THE VICTIM OF A HATE CRIME?

Whether you are a disabled person, a migrant, a homeless person or someone living in temporary accommodation suffering from social exclusion, a person practising a religion, a person with a sexual or gender personal orientation, whether you are a member of an ethnic minority or a national minority of the European Union (Roma, Romanians, Turks, Surinamese, Albanians, Serbs, Bosnians, Somalians, Russians, etc.):

YOU ALL HAVE ACCESS TO JUSTICE AND TO THE LAW!

Our Association, the EUROPEAN OBSERVATORY FOR NON-DISCRIMINATION AND FUNDAMENTAL RIGHTS works to guarantee non-discrimination and fundamental rights, with the aim of promoting these and making everyone aware of them.

The Charter of Fundamental Rights of the European Union guarantees the right to effective legal redress and the right to access an independent and impartial court within a reasonable period of time, including the entitlement to legal aid for those who do not possess the necessary resources.

Article 21 of the Charter of Fundamental Rights of the European Union moreover states that: «1. Any discrimination based on any ground such as sex, race, colour, ethnic or social origin, genetic features, language, religion or belief, political or any other opinion, membership of a national minority, property, birth, disability, age or sexual orientation shall be prohibited».

Article 22 of the Charter of Fundamental Rights of the European Union also states that: «The Union shall respect cultural, religious and linguistic diversity».

TOGETHER WE CAN COMBAT HATE CRIMES AND ALL FORMS OF DISCRIMINATION». 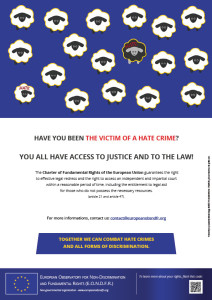 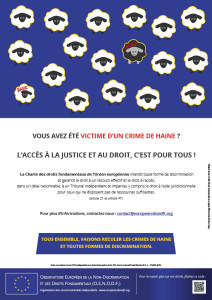 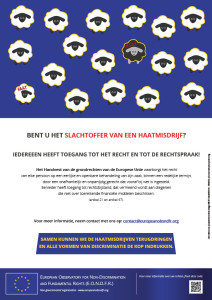 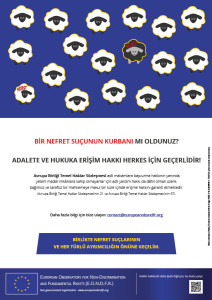