Blog - Latest News
You are here: Alku / Bioetiikka - Transhumanismi / Bioethics. Surrogacy. Detailed Survey of surrogate mothers in INDIA by...
Imprimer
A- A A+

➡ Sheela Saravanan is an Indian researcher with a Doctorate in Public Health and has worked in several German universities. It belongs in particular to the Institute of Ethics and History of Medicine at the University of Göttingen.

As a feminist, she is interested in violence against women in India and in the South, as well as in reproductive technologies, particularly the “procreation with medical assistance”, leading to surrogate mothers in INDIA.

➡ She has conducted a lengthy survey of surrogate mothers in India, and has published as a result of her research “A Transnational Feminist View of Surrogacy Biomarkets in India” (Springer, 2018), a document made from many interviews.

It reveals the terrible conditions under which surrogates are closely monitored throughout their pregnancy. The surrogate mothers in INDIA are very poor, are held in quasi-captivity, without any psychological support.

Poor Indian Woman, surrogate mother, selling its baby for money. No to surrogacy. 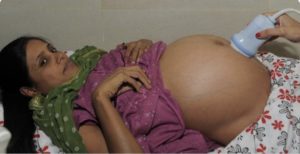