You are here: Alku / Turvapaikka, maahanmuutto ja rajat
A- A A+

✅ Carnival has become a cultural pretext to display religious hatred and to violate Fundamental Rights.

📍this scene from the Alost Carnival, in Belgium, where their is a parade with costume of Members of the SS, with joy and a good mood ; ⁣

📍This scene from the Rijeka Carnival, in Croatia, where the image of a gay couple is burnt. 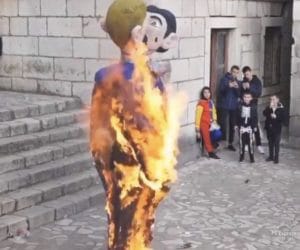 ✅ In France, in the Valley of the ROYA, Cédric Herrou has created the first farm Emmaüs Community, which employs and hosts migrant companions regardless of their administrative status, Emmaüs Roya, with 800 olive trees.
Monthy wages :  350 € / month, with accommodation on site.

✅ The sale of products is organized in short circuits in the shops of the valley, in an organic store or within an Amap (Association for the maintenance of a peasant agriculture).

✅ 20 US States want to oppose the indefinite detention of Migrant Children required by the US Federal Administration.

20 US states want to oppose unrestricted detention required by the US  Homeland Security Department.

This US Department wants to end a 1997 Court Judgment, called “FLORES,” requiring federal authorities not to detain children over 20 days. The actual US Administration believes that the “FLORES” Case Law is out of date in the current migratory context, and hopes that this 20-day limit will be lifted in the next two months.

✅ A Democratic State can not resolve to throw innocent children in jail and to sacrify their childhood. Migrant Children can not be a “political weapon” to win elections.

Learn more : 20 US States want to oppose unrestricted detention required by the US Homeland Securité Department.

✅ Key statistics on Asylum Seekers in the European Union.

✅ World Refugee Day is organized every year on 20th June by the United Nations Refugee Agency (U.N.H.C.R.) and is dedicated to raising awareness of the situation of refugees worldwide.

And if you were a Refugee ?

Learn more : Global Scheme and articles on Asylum Seekers in the European Union, in 2018.

Global Scheme on Asylum Seekers in the European Union. Situation in 2018. 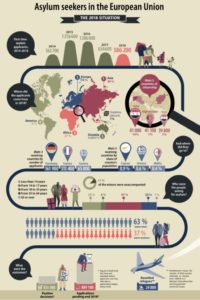 ▶ Isolated foreign minor children : bone tests are reliable only when these children are far from their majority.

▶ Try to objectify the chronological age of an isolated minor child, by using a scientific criterion or a statistical criterion based on different populations from North America or from Europe, and without taking into account the acceleration of the process maturation by dangerous and traumatic journeys, is a criterion which is not reliable.

▶ Some young persons who have had a bone test have been given a broad scale of age, such as “between 18 and 25 years of age” : this approximation is not reliable.

Learn more : Isolated foreign minor children: bone tests are reliable only when these children are far from their majority.

▶ Dematerialization of administrative procedures : in France, the Defender of Rights warns about the inequalities of access to public services.

Learn more : Dematerialization of administrative procedures : in France, the Defender of Rights warns about the inequalities of access to public services.

▶ In France, the number of Migrants rose to 800 and 1,200 in Paris and Saint-Denis, around 500 in Calais (Pas-de-Calais), around 400 in Grande-Synthe (North), around 200 in Ouistreham (Calvados), and several dozens are scattered along the coastline of the French Channel.

▶ Thousands of Migrants sleep every night on the street.

▶ Better housing Migrants living in the street, many of whom are minors, so Teens, to help them to overcome their trauma endured and to solve the multiple factors of migration from Africa to the European Union is a fight.

Learn more : “Migrants living in the street, in France”.

Libya: Migrants have always been victims of rape in Libya both in official detention centers and in clandestine centers.

Migrants have always been victims of rape in Libya in both official and clandestine detention centers. What has changed today is that we know it, whereas five years ago, public opinion was not ready to hear stories of rape. She did not understand the degree of violence that migrants experienced in Libyan detention centers.

The Libyan territory is shared by hundreds of militias who are fighting a war for parts of territory but also for the management of migration channels. All militias have clandestine detention centers in which armed men detain and abuse migrants, including sexual violence.

Although it is difficult to talk about it, it is important for migrants to address the issue of rape when they are interviewed for their asylum application, especially if there have been reoccurrences. To best document what happened to a person in Libya, one must try to find out where the person was detained, by whom (which militia) and for how long.

Learn more : Migrants have always been victims of rape in Libya.

Belgium 🇧🇪.
▶ The violence of the Belgian police against migrants, including minor migrants (around 30%) comes to light  : dog bites, fingers returned, strip searches in front of hilarious female staff, threats of execution, simulations of prostitution scenes.

▶ Human dignity is not negotiable.

Learn more : www.lemonde.fr/Violence of the Belgian police against migrants.

Violence of Belgian Police against migrants. 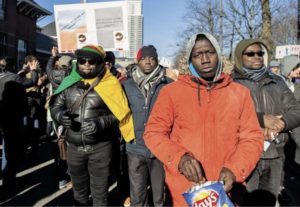 in the worldAccording to the Annual Report of the United Nations Refugee Agency, wars, violence and persecution have pushed forced displacement around the world to a new record, with 68.5 million people uprooted in 2017, an all-out two seconds, about the population of Thailand.

The term “refugee” refers to anyone who, “with a well-founded fear of persecution because of race, religion, nationality, membership of a particular social group or political out of the country of which she has the nationality and which can not, or because of this fear, want to claim the protection of this country ; or who, if he has no nationality and is outside the country in which he had his habitual residence as a result of such events, can not or, because of that fear, does not want to return there “, according to International Organization for Migration (IOM).

Refugees who fled their country to escape conflict and persecution account for 25.4 million people of the 68.5 million uprooted people, an increase of 2.9 million from 2016 and also the largest increase ever recorded by UNHCR for a single year. At the same time, the number of asylum seekers still awaiting refugee status as of December 31, 2017 increased by approximately 300,000 to 3.1 million people. Internally displaced persons number 40 million. Developing countries are the most affected.

Syrian Kurdish refugees are traveling to Turkey from Syria near the town of Kobani. Photo UNHCR / I. Prickett 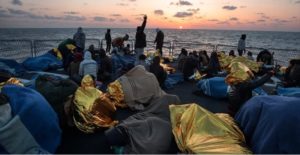