You are here: Alku / fight

PERSECUTION OF THE ROHINGYAS – PLIGHT OF THE REFUGEES

The Rohingya minority is one of the most persecuted minorities in the world.

Myanmar’s treatment of the Rohingya community is an unmistakable and serious breach of international Human Rights Laws. Successive Burmese military governments have since early 1970s viewed the Rohingya Muslim minority, who live on their ancestral borderlands between the Islamic country of Bangladesh and Buddhist Myanmar, as “a threat to Myanmar’s national security and local Buddhist culture”.

The Rohingya persecution by the Myanmar military began in 1978 under the pretext of a crackdown on the illegal Bengali immigration into Western Myanmar from the then newly independent Bangladesh. The military used the Rohingya as a proxy population against the extremely nationalistic and anti-Myanmar Rakhine people, who resent Myanmar rule as a colonial occupation of their once sovereign nation.

The United Nations has repeatedly referred to human rights violations in the region, but the government of State Councilor Aung San Suu Kyi systematically refutes these reports.

On the ground, the soldiers and policemen, who are deployed in western Burma, obey the army chief, not the Aung San Suu Kyi government.

Access to international aid workers and journalists is severely restricted in this area.

Hand 4 Burma e.V is actively seeking partnerships and associations with other development organisations for the following purposes :

HAND 4 BURMA e. V has become a Member and a Partner of the European Observatory for Non-Discrimination and Fundamental Rights. 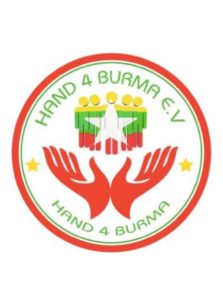