Location of the action : DOWNTOWN OF LONDON, UNITED KINGDOM.

March 2016 : A Team of volunteers of our Association flight to LONDON. Thanks to the French newspaper “Liberation”, we knew that at Hackney, a popular area of North LONDON, the homeless persons can’t sleep over or beg outside under penalty of 100 pounds – or 137 euros (we wonder how they could pay for it). In case of non-payment, the fine may be up to 1370 euros. The bylaw was passed in May 2015. According to the order of protection of public space (PSPO), Hackney’s Police or Municipal Officers may require any person to stop “begging, drinking alcohol, having antisocial behaviors, wrong use public toilets, sleeping in the street, urinate or defecate in a public space or having a dog off leash causing nuisance “.

We noticed that near Saint-Pancreas Station, a homeless person was expelled in front of us, without reason.

We organized free distribution operations of burgers to homeless persons in the downtown of LONDON and we gave them a human and moral support.

Our Team in LONDON

Our Team in LONDON 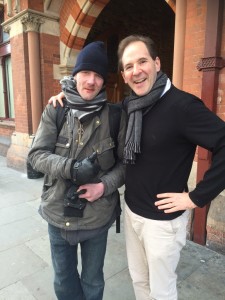 1. This homeless person, protected himself against the cold, didn’t disturb anyone.

2. This homeless person was brutally expelled by an official.

3. We gave to this homeless person a moral and material support. We took time with him to look for solutions.