Blog - Latest News
You are here: Home / Azylu, imigracji i granic / Homelessness in European Union : the hidden side of the European Union...
Imprimer
A- A A+

I. HOMELESSNESS IN EUROPEAN UNION

The crisis of poor housing in the In European Union calls for an urgent and profound strategy, in consultation with local associations, and public subsidies easily obtainable for them, without going through technocratic projects and far from the field.

In FRANCE, lease eviction figures show that successive governments are unable to put in place for years a plan of action and a strategy that has been adapted to solve evictions linked to extreme poverty.

End of the winter break : 15,000 forced evictions, up 50% since 2013.  Lease evictions, prohibited during the winter, are daily occurrences from April 1st. Every year, more than 155,000 unpaid rent procedures are launched.

Successive governments must fight with force the roots of homelessness instead of fighting homeless persons.

Homelessness in European Union : the hidden side of the European Union. Another Europe. Learn more : Abbé Pierre Fundation and FEANTSA. 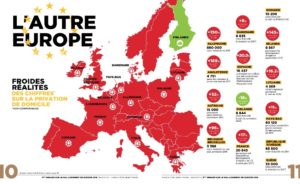